The Road Of The Fortresses: from Limone Piemonte - Alta Via del Sale

It is an evocative route that allows to know the naturalistic and landscape reality of the territory, together with the interesting historical military fortifications located on the Italian-French border.
The departure is scheduled from Limone Piemonte, a resort with quality tourist facilities that allow you to fully meet the needs of a wide audience, offering hospitality in high-level facilities such as hotels, resorts and chalets, as well as solutions cheaper and informal in holiday accommodation, bed and breakfast or in landlords.

From the town of Limone Piemonte, go along the SS 20 for a short stretch, until you take the path that leads to the town of Sant’Anna to reach the grassy basin of the Tetti Catalin at an altitude of 1.275 m, and continue towards the Tetti Cortassa (1,454 m), where there is a mountain pasture which also produces cheese making and direct sale of cheese.
From here we descend towards the Liset Tetti and reach Limonetto.
Continue for a long stretch along the GTA route (the stage relative to the Limonetto-Colle di Tenda-Colla Piana-Gias route of the Ortica-Passo del Duca-Rifugio Garelli) until reaching Colle di Tenda.
After crossing a beautiful beech forest, you follow a cart track, in some parts bordered by ancient dry stone walls and climb to the valley basin of Cascina San Lorenzo.

Continue along a mule track that, in some places, coincides with the ancient Via Romana (defined for the presence of some sections of paving that refer to the construction type of the ancient Roman roads) up to Colle di Tenda (1,871 m). Reached the Colle di Tenda you need to decide whether to continue along the path that leads to the Valle Pesio to the north or to deviate south into French territory. From here, in fact, you can make some variations that, from the main road, lead to the striking forts, until you reach the town of Casterino, passing the Forte de la Marguerie.
Instead, if you want to continue along the path that leads to the Certosa di Pesio, from the Colle di Tenda you will cross the former Military Route for a while, abandoning the GTA route, and after the Central Fort continue to the Tabourde Fort. towards the Cima del Beccorosso (2,214 m).
Then we take the GTA route up to the Cima del Becco (altitude 2.300 m), and to the Col della Perla (2.083 m). Continue along the road until Colle della Boaria, and then continue along a stretch of the trail the GTA path until you reach the Capanna Morgantini.
Going on, you reach the pasture shelf of the Gias dell’Ortica (altitude 1,836 m) from which you overlook the enchanting slope of the Carsene. Going further, you reach the Passo del Duca at 1,989 m from where you can take the route of the Marguareis Tour to reach the evocative Saut Waterfall and descend towards the Pesio Valley. 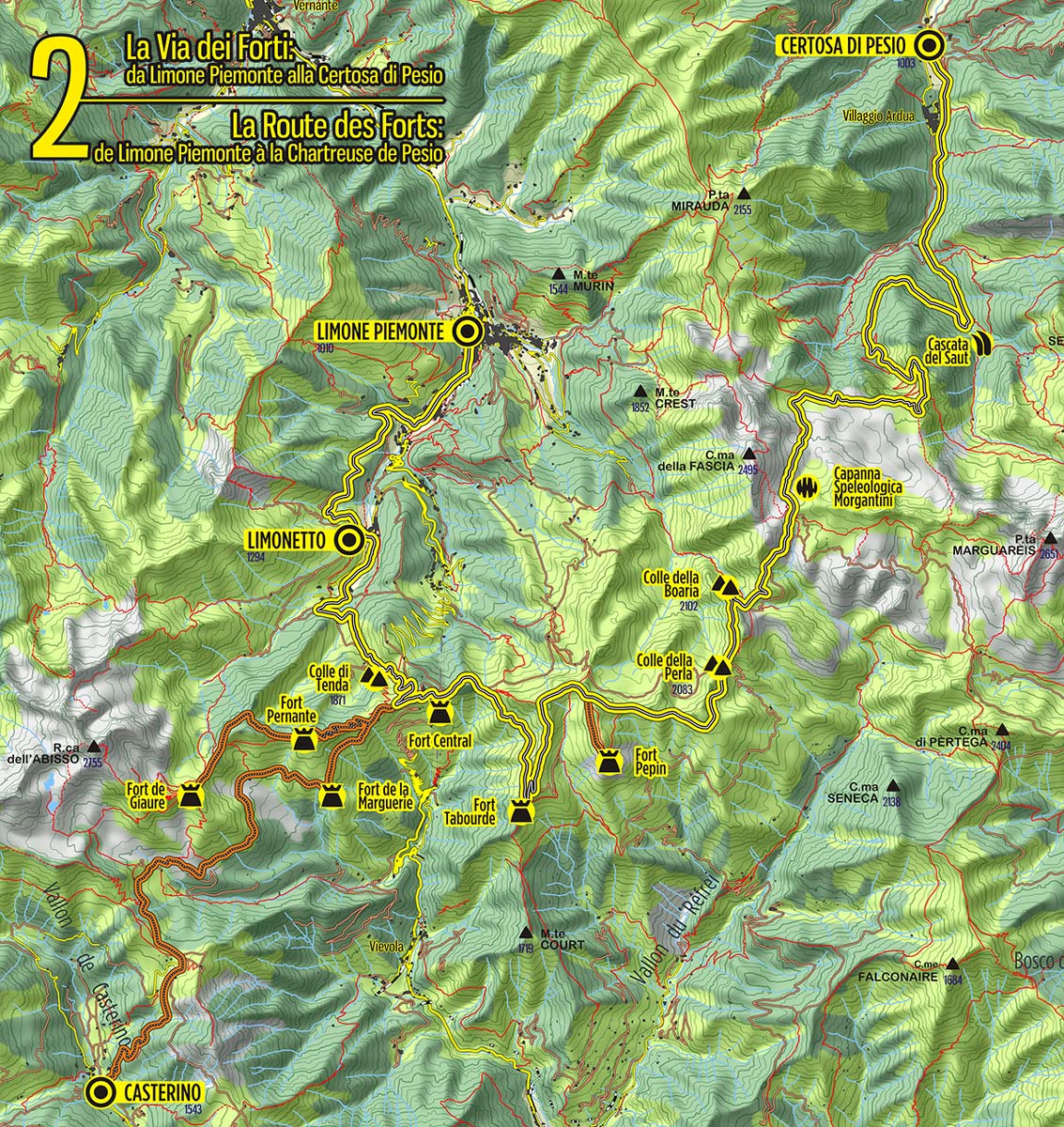 The itinerary starts from the heights above Limone Piemonte and, completing a wide turn, bends towards the north, remaining at altitude until reaching the Certosa di Pesio. The main route develops mostly in Italian territory but for a while also borders on French territory. However, there is the possibility of making a variation that definitely bends towards the south going down towards the Valle delle Meraviglie with the destination Casterino.

Total length: Itinerary of about 40 km, averageable in 6 hours.

Difficulty and distance: Cycle touring of medium difficulty, practicable by everyone, practicable in MTB, with pedal assisted bicycle, on foot and / or on horseback.