It winds its way along the mountainsides following the main Alpine watershed near the border between Italy and France, at altitudes between 1800 and 2100 metres, through a succession of Alpine crossings, hairpin bends and thrilling passes.
The entirely unsealed road connects Limone Piemonte, in the province of Cuneo, with Monesi di Triora, in the Ligurian mountains, covering a total distance of approximately 30 kilometres at high altitude. It is open during summer and autumn, after the snow has thawed. The route takes in magical places, such as the evocative Carsene area, with almost lunar landscapes full of geological formations, and the unspoiled landscapes of the Mediterranean Alps. It crosses the Marguareis and Alpi Liguri parks, characterized by great biodiversity, and the splendid Bosco delle Navette forest, and passes by several late 19th-century military fortifications.

The military roads are lined by abundant flowers belonging to the 2,600 plant species recorded in this area. The Ligurian and Maritime Alps boast such great botanical wealth because environmental conditions can vary considerably on different sides of the same mountain, with the southern slopes enjoying a Mediterranean climate and the others a continental one.

The Upper Salt Road is a pulsing artery of an enormous area that can be explored along the road itself, but also through numerous itineraries that wind between Italy and France, and between the mountains and the sea, which connect to the Ligurian Cycle Route. This wide array of itineraries suitable for walkers, mountain bikers, and even off-road enthusiasts with 4-wheel drive vehicles, allows the exploration of an area that touches on three major park areas and is dotted with little towns and villages that have much to offer visitors, in every respect. Indeed, those seeking contact with the untamed nature of the peaks or the pleasure of cycling along one of the countless paths, will also find museums, delightful old towns, ancient traditions, prehistoric rock art, excellent gourmet food, open-air playgrounds, and much more besides.

The extraordinary beauty of the numerous panoramic views that accompany travellers along this fascinating road impresses unforgettable memories on their minds, which often lure them back again.

Entrance is free of charge for hikers and cyclists, while the road is open to motor vehicles upon payment of a toll payable here, or at the entrances in Limone Piemonte, Cabanaira, Bosco delle Navette, Ponte Giairetto and Briga Alta. The road can be reached by motor vehicle from six different access points: Limone Piemonte, Ormea-Upega di Briga Alta, Triora, Pigna, La Brigue and Tenda; and from the entrances in Valle Gesso and Valle Pesio, exclusively for experienced hikers and mountain bikers (in good physical condition).
The road is closed to motor vehicles all day on Tuesdays and Thursdays, and is open every day to walkers and cyclists. 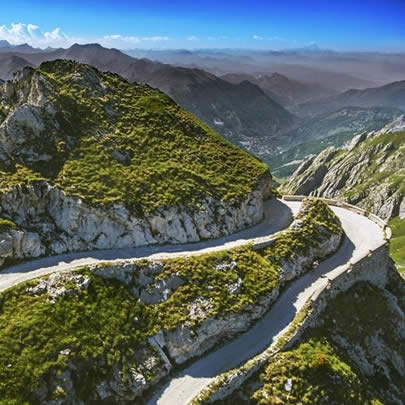 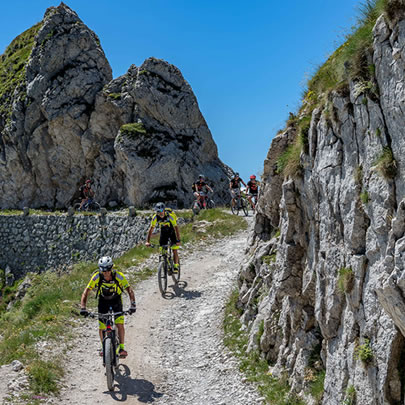 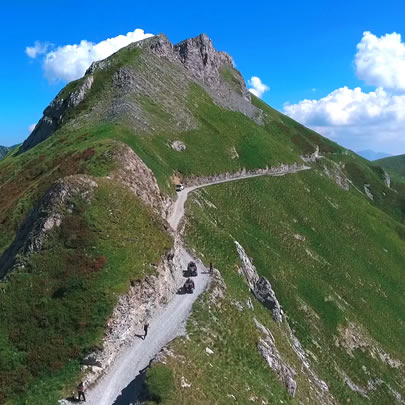 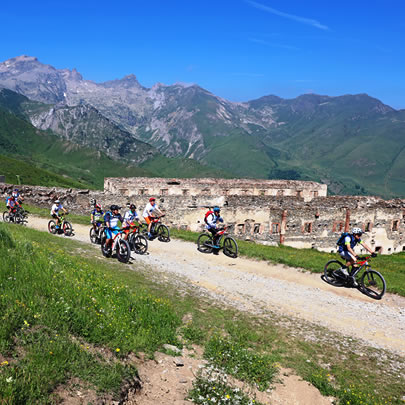 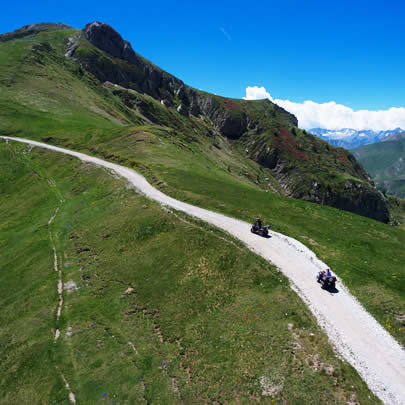 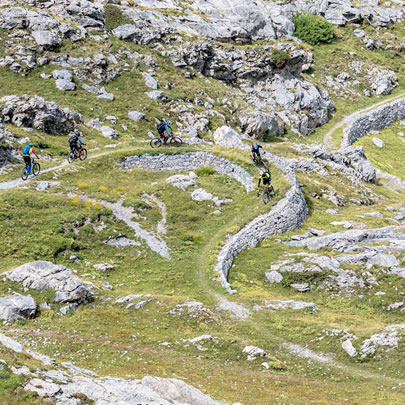 While salt may seem a commonplace product today, in ancient times it was highly valued, and indeed for many centuries it was considered a quintessential trading commodity. Citizens were long oppressed by the notorious gabelle because the compulsory purchase of salt from the state monopoly by each family, according to family size and certain other factors, amounted to what we would we now consider a tax. Salt was also the cause of bloody wars, and some Alpine regions of the lower province of Cuneo fought a war to defend ancient privileges that exempted them from the payment of this tax, which continued for decades and ended in thousands of deaths, burned-down villages and the deportation of families that had rebelled against their rulers.
Consequently, it is no surprise that this precious commodity is still commemorated in the name of several of the roads that link the plain with the sea, its natural source.

The name of Upper Salt Road is associated with the ancient mule trains that used to travel along one of the oldest mountain passes in the Alps: Colle di Tenda. Thousands of mule trains (a typical form of transport in ancient times) crossed this pass on the mountain once known as Cornio, 1,870 metres above sea level, laden with salt, oil, cheeses, and wheat for trade between the Cuneo plain and the Ligurian coast, and vice versa. From here the Alta Via del Sale, a high-altitude road that never drops much below 2,000 metres, continues to Monesi, a hamlet of Triora, through an area of incomparable beauty. The landscapes constantly change, from the rugged karst vistas of the first stretch to the shady section through the boundless Bosco delle Navette coniferous forest, skirting towering grim peaks and cutting through sloping mountain pastures adorned with vast expanses of flowering rhododendrons and other Alpine plants.
Today the road bears the traces of the history and the centuries when it was trodden by shepherds, wayfarers and soldiers, all of whom contributed to its heritage, with bridges, embankments and walls built by hand from local stone. At times carved out of the rock, at others almost suspended from the daring bends that soar upwards, twisting in the air, or winding between larch and fir trees, the road is a monument in itself, and deserves to be considered and travelled as such.