In Ormea and Tanaro Valley the ancient memory of Saracen rule lives on in the place names, folklore and food. This tour crosses the Maritime Alps from Ormea to Limone, through the rugged landscapes of the Upper Tanaro, which is known as Torrente Negrone in its highest reaches, and then continues along the spectacular panoramic Upper Salt Road in the opposite direction to itinerary 2.

From Ormea, head to Viozene, motor vehicles can travel via the normal road, while cyclists can use the cycle route on the right bank of the Tanaro as far as Ponte di Nava, and then join the main road to Viozene. Alternatively, Viozene can be reached from the hamlet of Quarzina along the “Balconata di Ormea”, a pleasant cultural-tourist trail at medium altitude through rustic villages and scattered farms. Beyond Viozene, the carriageable road passes through the wild Gola delle Fascette, with tunnels and stretches with sheer drops as far as Upega. Continue on the main road towards Monesi, among the splendid larch trees of the Bosco delle Navette. Just before Colletta delle Salse, near the bridge over the Rio Giairetto, turn off the sealed road and proceed on the right among the conifers, joining the Upper Salt Road at the Navette entrance a little further along.

Continue on the Limone-Monesi road heading north towards Limone in the upper reaches of the Bosco delle Navette, then skirt the grassy pyramid of Cima di Pertegà, and cross the Flamargal Pass to reach the Don Barbera mountain hut at Colle dei Signori. The road crosses the desolate Carsene Basin at the foot of Punta Marguareis, dotted with rocky outcrops and geological formations. From Colle della Boaria, the road leads to the spectacular, exposed hairpin bend cut out the rock known as Zabriskie Point. It continues with gentle ascents and descents on the Piedmontese side, before crossing Colletto Campanin, with a series of fine masonry bends. You will soon pass the Cabanaira toll entrance, near a ski lift, and approach the Colle di Tenda fortifications, from which a sealed road gently descends to Limone 1400 and Cuneo. 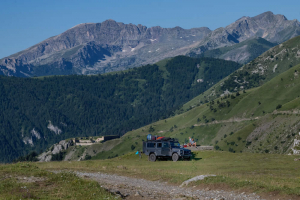 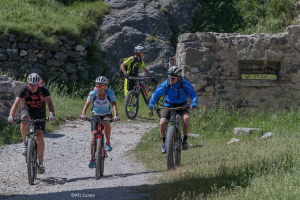 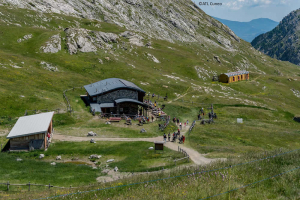 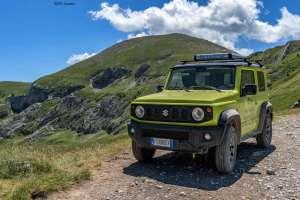 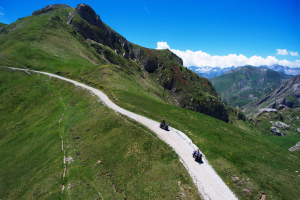